Our suction units, which are known under the company name “Munkebo”, are among the most efficient on the market. They were designed specially to transport blast media, which cannot be done efficiently with simple industrial vacuum cleaners. The suction unit is a vacuum system and is particularly suitable if blast media has to be transported over longer distances. A choice of seven different sizes of suction units provides extraction for up to 35 tonnes of blast media per hour over a maximum conveyance section of 120 metres. Because of this variety of products, there are suction units that are suitable for large construction sites, such as those on shipyards or bridge work, as well as for stationary use in blast rooms where space is limited in the machine room. In addition, a suction unit can also be portable because of integrated crane eyes and forklift pockets that make transport possible.

The suction unit is combined with a storage silo over which back suctioning occurs and in which the reusable blast media is collected. An optional cascade that can be placed on the upper chamber can also improve the cleaning and thus the quality of the blast media. A cyclone pre-separator, which is also an option, removes dust and debris upstream of the suction unit to extend its service life significantly. These optional enhancements make it possible to assemble the ideal equipment for a suction system depending on the needs and circumstances.

Each suction unit is equipped with filter cartridges to suit its size, so that the exhaust air is purified according to applicable environmental regulations.

All products for Suction Units 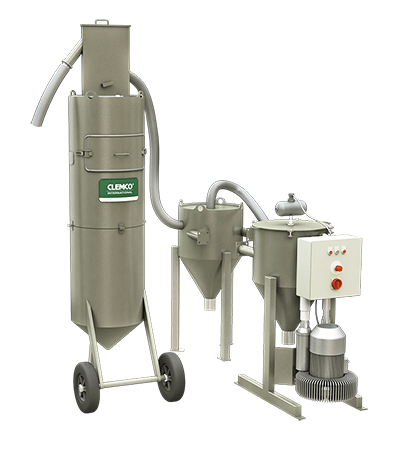