The metering valve is one of the main components of every blast machine and it controls the respective flow rate of the blast media into the air flow. The principle “the more, the better” does not apply to efficient blasting. It is rather a matter of metering out the right balance between blast media and air. Too little blast media will not produce the optimal performance, and will cover less area. On the other hand, too much blast media blocks the blast media flow and reduces the discharge velocity of the air/blast media mixture, which also affects the performance. In addition, it also wastes blast media unnecessarily. Therefore, attention must always be given to the correct metering of the respective blast media. This can be recognised by a slight discolouration on the nozzle outlet, similar to the flame of a candle.

The Clemco product line contains different abrasive metering valves that are used for different purposes in each case. Here is a list of the most important valves:

FSV / MP abrasive metering valve: Easy metering by means of a slide valve. It is particularly rugged and is therefore optimal for outside use, such as on construction sites, for example.

Quantum K (QK) abrasive metering valve: Unlike the FSV valve, this metering valve has an adjustment knob that can be used for especially precise metering. Its construction makes it especially suitable for aggressive and fine blast media.

PT abrasive metering valve: This valve has an adjustment knob for abrasive metering and is operated pneumatically. It is coupled to the deadman handle and the compressed air, and opens only when actuated by compressed air; otherwise, the valve is closed. On the one hand, this saves blast media, and on the other hand, the blast machine can also be used to blow off the blasted object with pure compressed air. In addition, it is also optimal for automatic blasting processes that require an even blast media flow.

All products for Metering Valves 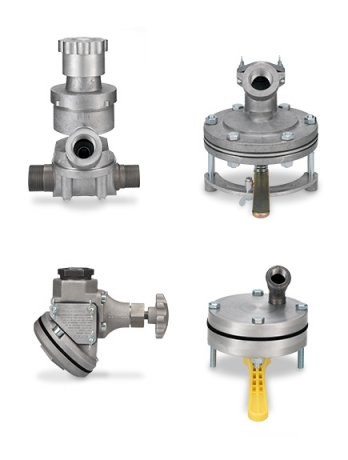